Why Goddess Pendants? To better answer that, we have to understand the many reasons we make any human figurative art or study female/Goddess figures throughout human history. See http://suppressedhistories.net/

In some languages, the word for history also means story. https://en.wikipedia.org/wiki/History

Through my beads, I’m telling my story — I’m a woman, domestic abuse survivor, an artist, I’m on the autism spectrum, and my Goddess pendants help tell my story in the contexts of an interest in equality, as opposed to abuse and sexism.  My beads are about equality and power — it’s abuse vs. equality. Women’s rights and Goddess stuff are considered too minority interest, too fringe despite the fact that half the world is female, and that’s a problem. Goddess/female figures may even be banned or get demonized.

Example 1: I had drawn renditions of the Venus of Willendorf, a world famous archaeological find, on shrink plastic and made pendants of them. fThese shrink plastic beads were banned on Myspace as obscene. Here’s what they looked like. 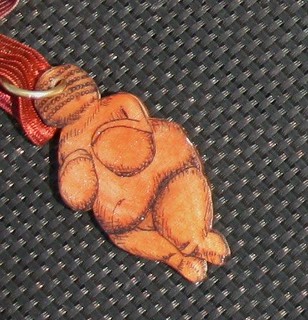 Example 2: I wore a Goddess necklace to Walmart. The cashier suggested I could make money selling them as rather, tee-hee, lewd little party favors at bachelor or bachelorette parties. She had absolutely no inkling that she shouldn’t simply sexualize and peg them in such a narrow, restrictive manner, as opposed to all that the Goddess concept can potentially encompass on a daily basis. Equality touches all all aspects of life, and this shouldn’t be marginalized, pegged as a lewd/lesbian thing, or treated as a fringe topic. Anyway, my Goddess pendant was profane image to her, but to those that wear them, Goddess art and pendants are more of a spiritual and intellectual thing and, more specifically, symbolize spiritual and social equality. They embody, invoke, and evoke this.

As an artist, I cultivate messages and images that are needed, rather than what people are conditioned to lap up from the pundits, pulpits, and consumerism. It concerns me that the world is full of “sanitized,” corporate-made, mainstream images and messages about women and their bodies, messages that are loaded with sexism both overt and/or insidious.

The pussy hat phenomenon shows us that feminine symbols of equality ARE needed. There is the desire to create our world pluralistically without the reality filters of sexism, cultural triumphalism, racism, or creedism (religious prejudice). I desire more autonomous and honest dialog and equality, and I hope you do too.

We still live in a world in which women often don’t get paid the same amount for doing the same job no matter how well they do it, or even if they do it better. As a US citizen, I live in a country in which a considerable majority of art gallery artists are male. It’s a country in which women’s art generally sells for only a small fraction of the profit that art made by men can fetch. We live in a world in which the majority of religion is really male-centric and male-dominated. We live in a world in which men’s voices are given more weight and are heard more. It’s not Goddess, it’s God with no room for any female divine. Instead, we still have the Madonna-Whore Complex. The feminine divine either is falsely demonized, socially/theologically outlawed (or banned), or turned into a whore.

Anti-intellectual, male dominated paradigms hold feminine equality at odds with more formative power structures, be they economic, religious, artistic, or what have you. How is sexism considered to be the fabric of society? And what does that have to do with domestic violence anyway?

See “The Ascent of Woman”: http://www.bbc.co.uk/programmes/b0693dsh

Domestic Abuse and the Metaparadigm (Mother World View) of Abuse/War

“the most reliable indicator of whether or not there is violence inside a country, or whether it will use military violence against another country, is not poverty or access to natural resources or religion or even degree of democracy. It’s violence against females.” — from “Gloria Steinem’s new show links global instability to violence against women: “For the first time there are fewer females on earth than males”

The Power and Control (Abuse) and Equality (Nonviolence) wheels, what they mean, what they look like in current events or everyday situations are sadly only usually discussed, shown, or used during domestic abuse prevention/recovery. They are, in fact, paradigmatic and are applicable on a personal, local, national, and global scale. Here’s what goes on with the Power and Control (Abuse) paradigm.

Methods of abusive power and control have been and continue to be used as social, legal, religious, and financial weapons and they often result in violence, be it domestic or wartime violence. The Power and Control wheel/paradigm is diametrically opposed to Equality because it relies on abusive imbalances of power. This is true whether they pretend to protect us and have our best interests in mind or whether they lay bare their prejudices, sexism, and ambitions.  It takes power and rights away from others in order to feel powerful and it’s a massive failure of imagination.

Here’s a page from my art journal on the Equality (nonviolence) power wheel. Notice the notes on imagination.

Art is the Antidote

How is it that society today hasn’t quit its addiction to prejudice, bigotry, sexism and the like? I don’t pretend to understand all that and I hope I never do. I can imagine many other paths to power. I can imagine sharing it. And as a woman and an artist, I shape a more inclusive world in clay, canvas, paper, fiber, cloth, and words. Art is an antidote. Symbols matter. Symbols are powerful and my art beads are ones I can bring into all sorts of every day settings.